According to Post Office Money Mortgages, a third (36%) of homes in the UK – equivalent to 5.5 million properties – are now in areas where the average home is unaffordable for first-time buyers. This is a trend that is getting worse, with hundreds of neighbourhoods falling out of reach over the past 20 years. 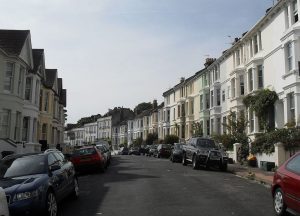 By The Voice of Hassocks (Own work) [Public domain], via Wikimedia Commons

Brighton was found to be the most unaffordable city in the study, with only 9% of properties in the city within reach of those looking to get a foot on the property ladder, compared to 100% in 1995. Homes in the city have increased in value by 463% over the past 20 years and now stand at an average of £305,149. This may be due to a displaced London and quality of life effect as Brighton is an hour commute into London by train combined with the perceived effect of also living by the sea. Although Coventry can’t offer seaside locations and beaches it is also an hour commute into London!

This contrasts with Southampton just along the coast which was found to be one of the more affordable spots for first-time buyers, with properties there costing £183,443 on average.

The report on affordability of housing for first-time buyers

The study found that 20 years earlier – in 1995 – 100% of Brighton would have been affordable for the average first-time buyer there.

Across England and Wales, the average cost of a home has risen by around 306 per cent since 1995, with a typical property selling for 5.51 times more than the average first-time buyer’s annual pay packet, the Post Office Money Mortgages said.

John Willcock, head of mortgages at Post Office Money, said: “These figures highlight the challenges facing today’s first-time buyers. Cities such as Brighton are becoming unaffordable blackspots for those looking to get on the ladder, with average property prices far beyond the typical budget. The London property market has always been more challenging for new buyers to break into, which is why many instead turned to surrounding areas within a commutable distance – which in turn are becoming increasingly unaffordable.

“Many would-be buyers are having to compromise on their housing needs in order to take that all-important first step onto the ladder. For some, this is a case of prioritising what is really essential in a home, but for others this means significant changes to their lifestyle, moving further away from work, family and friends. The earlier people start to plan and save for the future, the closer their housing reality is likely to be to their goal.”

Cities surveyed in the Midlands such as Birmingham and Nottingham remain good options for first-time buyers with the percentage of affordable properties reducing but still staying high at 82% and 89% respectively.

With ever-increasing numbers priced out of cities they want to live in, it is unsurprising that 87 per cent of people who bought their first home in the last year said they were forced to lower their expectations to get on the ladder, compared with less than three in 10 in 1995.

Nearly a quarter of first-time buyers within the past year moved further away from local transport links than they had planned, while a fifth sacrificed living close to good schools.

The report said demands on properties themselves are also changing, with gardens becoming less of a ‘must-have’. In 1995, 41 per cent of people who made it on to the property ladder said a garden was essential, compared to 13 per cent in the last year.

While not covered in this report, property in Coventry remains a good choice for first-time buyers get in touch with Foster Lewis and Co on on 02476 592929 or submit our contact form.

Which areas are affordable for first-time buyers?